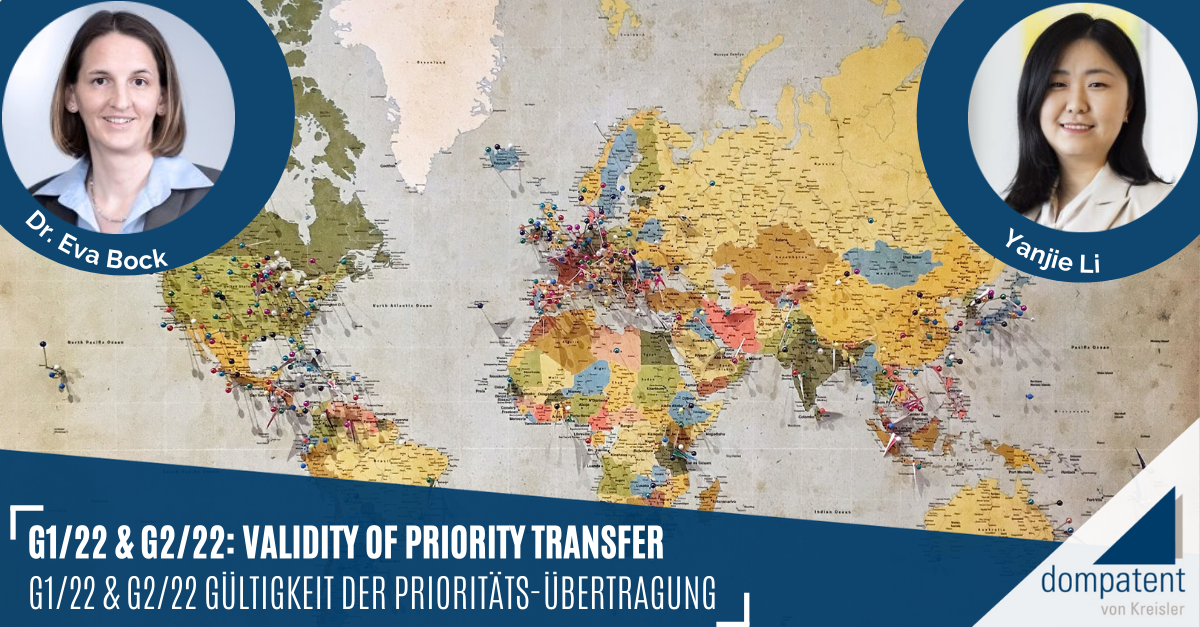 Lately there has been an increasing number of disputes before the European Patent Office regarding the priority right. To validly claim priority, it is crucial to focus not only on the claimed subject matter but also on the formal entitlement to claim priority. Two questions have recently been referred to the Enlarged Board of Appeal regarding the latter which could have a significant impact on how priority is accessed in Europe.

I. Does the EPC confer jurisdiction on the EPO to determine whether a party validly claims to be a successor in title as referred to in Article 87(1)(b) EPC?

II. If question I is answered in the affirmative:

The referred questions now being pended as G1/22 and G2/22 may be summarized as two general aspects regarding the priority right:

In the first case T1513/17, the decision of an opposition division to revoke a European patent EP1755674B1 was appealed. Said patent was filed as a Euro-PCT application. As depicted in Figure 1, the patent at issue claimed priority of a US provisional patent application for which the inventors (R, W and Z) were named as applicants. Yet, in the subsequent PCT filing, the inventors (R, W and Z) were designated as applicants for the United States only while in all the other designated offices including European Patent Office, the applicants were designated as parties (A and U) other than the inventors. 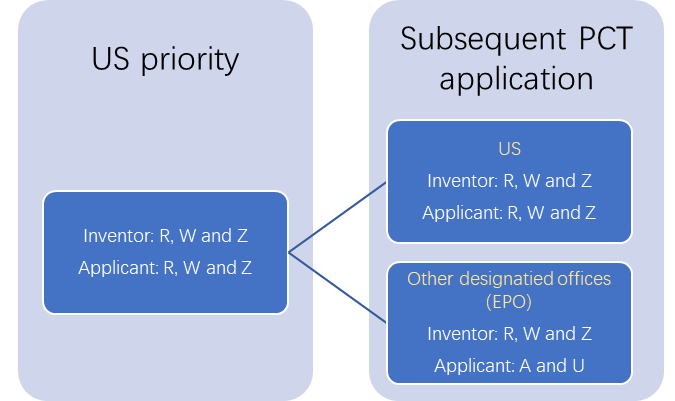 The second case, T 2719/19, dealt with the appeal of the decision of an examining division to reject the European patent application EP 16160321. This application is the 2nd divisional application of EP’ 674 mentioned above and therefore has the same question of priority depicted in Figure 1– whether the applicants of the Euro-PCT application (A and U) are entitled to claim the priority right owned by R, W and Z, as well as whether the EPO has the jurisdiction power to make such an assessment.

Jurisdiction of the EPO

In the referral questions formulated by the appellant and respondents, the jurisdiction power of the EPO to decide the entitlement of the priority was questioned.  Although the Board noticed that no convincing arguments had been presented, it decided to take this referral to the EBA as a convenient opportunity to have a settled decision.

Regarding the question of priority, the Board found that the EPO’s jurisdiction power had been questioned in several cases like T 239/16, T419/16 and T 845/19. In T 139/16 and T419/16, it was alleged that the power to decide the entitlement to the priority right shall be regarded in parallel to the power to determine whether a party is entitled to a particular patent application, which, according to the Travaux Préparatoires, the EPO does not have.

However, the Board preferred the position taken by T 844/18 stating that “there is no legal basis to relieve the EPO from the obligation to assess who has performed the act of filing the patent application as required by Article 87(1) EPC”. It is believed that, to avoid the possible disruptive effect a change may have, the bar to overturn the standing practise of the Boards of Appeal to decide on the priority rights in general, including the entitlement to the priority right should be very high.

Assuming that the EPO has the power to assess the successor in title, the second question to be answered is that whether the priority was validly claimed in the relevant case.

To address this problem, the appellant alleged in the pending cases that the joint-applicant approach developed in the jurisprudence of the EPO can be applied analogously to the patent at issue since the Euro – PCT application had the effect of a regular national application under Art. 11 (3) PCT and Art. 153 (2) EPC. In the absence of any prevailing PCT provision, the EPC should be applied.

As described in A-III 6.1 of the Guidelines of Examination at the EPO,

Further reference was made to Art. 118 EPC providing that

“where the applicants for or proprietors of a European patent are not the same in respect of different designated Contracting States, they shall be regarded as joint-applicants or proprietors for the purposes of proceedings before the European Patent Office.”

Hence, the question arises whether a PCT joint-applicants approach described above can be developed for this case and which legal system should be applied for the assessment.

The respondent I argued that the unitary character of the priority right in the PCT can provide the legal basis for this approach. The Board was not persuaded and believed that the validity of such approach should be assessed in the light of the Paris Convention, since the PCT does not create own rules regarding the effect of a priority claim but refers to Article 4 of the Paris Convention (Art. 8(2)(a) PCT).

To support the acknowledgement of the joint-applicant approach, the appellant submitted the judgement of the Court of Appeal (CoA) of The Hauge in the case Biogen/Genentech v. Celltrion. In this case, the CoA reasoned that the lex loci protectionis was applicable to the right priority because according to Art. 2(1) Paris Convention, the requirement for granting and nullification of patents in a particular country were determined in accordance with the national law and the right to priority was part of such requirement. For the Euro-PCT application, the applicable system should be the EPC.

Yet, the Board further found that, in the absence of EPC provision regarding formal requirements for the transfer of priority right by agreement, it can be argued that the mutual filing of a PCT application by Party A and B constitute an implicit agreement transferring the priority right owned by party A to Party B when party B is named as the applicant for the EPC territory and Party A as the applicant for the US. In addition, this approach can be convinced when applying other national law systems requiring no formalities.

A similar line of thinking was also adopted in a judgement of the Bundesgerichtshof (German Federal Court of Justice – BGH X ZR 49/12). The court reasoned that the validity of the German part of a European patent that claimed priority of a national German patent should be assessed in light of the German conflict of law-rule. Since the German law did not require any particular formalities for the transfer, the fact of mutual filing led to the conclusion that there was an implied agreement between the parties. In a UK judgment “KCI licensing Inc and others v. Smith & Nephew PLC and others”, the court was also of the opinion that an implied agreement of transferring priority right could be inferred from the PCT application.

Consequently, considering the exploding number of international applications, the answer of the EBA will fill the gap and provide a jurisprudence for a great number of cases dealing with similar situation. We look forward to further legal clarification of the Enlarged Board of Appeal.